Analysis, Politics - 22-Jan-2007
Supreme Court Vs Parliament: Constitution is supreme
While upholding Parliament's right to expel tainted members, the apex court asserts that the powers of the legislature are not beyond judicial review. Any trespass can be struck down. 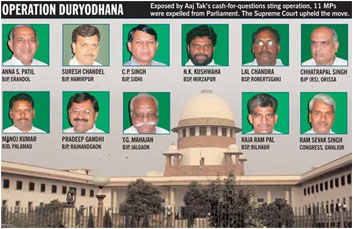 The Constitution is supreme and citizens' Fundamental Rights guaranteed under it are sacrosanct: lawmakers will have to follow this principle or be prepared to face judicial scrutiny. In two separate judgements, the outgoing Chief Justice Y.K. Sabharwal has laid to rest the ghosts of tussle between the legislature and the judiciary.

In upholding Parliament's right to expel its members, a five-judge bench of the Supreme Court held 4-1 in the cash for-query case that as a legislative body Parliament has all the rights but its actions must adhere to the basic structure of the Constitution and any trespass can be struck down.

The following day, a nine-member bench decided 9-0 that all laws put in the ninth schedule of the Constitution, to avoid judicial intervention, will now be open to examination if they violated the Fundamental Rights. The full bench has set April 1973 as the bar after which any law that has been put in the ninth schedule can be reviewed if it violates Articles 14, 19, 20 and 21. These Articles guarantee equality before law, freedom of speech, life and liberty.

A spate of petitions is now expected to challenge the nearly 284 laws that have been put in the ninth schedule to avoid judicial scrutiny. The most challenged ones could relate to reservations in states where they exceed the 50 per cent guideline of the Supreme Court given in the Indira Sawhney case of 1993.

Former solicitor-general Soli Sorabjee says the court has found a "statesman-like" way out of the muddle which had the Speaker fuming under his collar. Lok Sabha Speaker Somnath Chatterjee had consistently refused to answer summons from the Supreme Court to explain Parliament's position in the matter of expulsion.

The expelled MPs led by BSP's Raja Ram Pal had approached the court with the plea that Parliament did not have inherent powers to expel its members and that their fundamental rights had been violated as they had not been given a proper opportunity to be heard. The Supreme Court interpreted Parliament's powers under Article 105 to include the power of expulsion by a 4-1 majority even though the word expel does not appear anywhere in it. Chatterjee has welcomed the judgement as vindication of the stand of Parliament.

"The judiciary can scrutinise the validity of legislative action where transgression of Fundamental Rights is concerned."
Y.K. Sabharwal, CJI

"SC has recognised Parliament's   right to conduct itself and authority to legislate within the Constitutional framework."
S. Chatterjee, Speaker

The MPs had been caught on camera in a sting operation codenamed Operation Duryodhana by news channel Aaj Tak when it offered them money to raise question in Parliament. Reporters posing as representatives of 'North Indian Small scale Industries Association' even gave them the written questions with poorly disguised company names such as Tom Wolfe and Catch 22. Surprisingly, 25 such questions even passed Parliamentary scrutiny to be included in the question hour.

When the story broke on national television during the winter session, legislators were so astounded that they voted unanimously to expel the MPs. The Speaker's decision, after a swift enquiry, was supported by all parties even though the BJP which lost six MPS raised questions about the propriety of expelling them when there was no express provision to do so. After the Supreme Court judgement, BJP spokesman Ravishankar Prasad said, "We accept the judgement and even though the court has allowed the MPs to contest future elections, it is unlikely that they will get tickets."

The immediate impact of the decision will be fresh elections in 10 Lok Sabha constituencies. The Election Commission had sought directions from the Government several times in the past but Rampal's pending case had stalled it for over a year. In an interesting but significant aside, the Supreme Court also endorsed sting operations calling them useful "if done within the twin principles of legality and morality."

That should be the operative words for investigations on several other cases like Tehelka and Member of Parliament Local Area Development Scheme where both morality and legality of such operations have been questioned by the accused.

FUTURE TENSE
Over 100 Acts have been included in the ninth schedule post 1973. The validity of the following is now open to review.

The ninth schedule was created through the very first amendment in 1951 in which Article 31 B was inserted. Prime Minister Nehru wanted blanket protection for agrarian reforms so he contrived to deprive the courts from intervening in the process. It protected the land ceiling laws in rural and urban areas for a more equitable society. The Article is also retrospective in nature so later regimes used the schedule to evade judicial scrutiny altogether, even in cases where Supreme Court had declared certain laws void.

In the early 1990s, the then Tamil Nadu chief minister Jayalalithaa had been able to pressure Narasimha Rao into putting the controversial and much-challenged state law on reservation in the ninth schedule. The state has 69 per cent reservation in education and employment, which is much beyond the 50 per cent allowed by the Supreme Court. Since then, it had become outside judicial purview but it will now in all likelihood be challenged in the courts on the grounds of being violative of the Fundamental Rights.

What the judgements have achieved in terms of re-establishing the Constitutional balance between the legislature, judiciary and executive is far more significant. Besides the present CJI Y.K. Sabharwal, the nine-judge bench included CJI-designate Balakrishnan and several other future CJIs giving it an indelible stamp of authority.

The "Basic Structure of the Constitution" doctrine, laid down in Keshvanandan Bharti case in '73, has been upheld, clearly indicating that legislature has a well defined duty not to violate it and the judiciary has the responsibility to protect it by striking down anything which is ultra vires. Rajya Sabha member and Constitutional expert Fali Nariman says the twin judgements have asserted that the "Supreme Court is the final arbiter". It's a strong message the political class can't afford to ignore.