Analysis, Politics - 09-Apr-2001
Police officer act as foster father, teacher, guardian to urchins in Chhattisgarh
The future of urchins is on track, thanks to a visionary police officer. 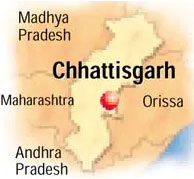 Most people know how noisy, how busy a railway platform can be. Amid the cacophony, one thing you would never expect, of course, would be the sing song chant of children at school. Which is why the railway station at Raipur in Chhattisgarh can be a surprise.

When the platform here is not echoing to the chugging of trains, a secluded corner reverberates to the sound of juvenile recitations. Between five and 13 years of age, these school children don't travel far to study, for they live on the platform itself, which incidentally is also a clinic, bank and hostel for them.

The man who has wrought this transformation wears several hats. Ramesh Sharma, superintendent of Railway Police (SRP), doubles as a foster father, teacher, guardian and philosopher to the railway children. Until three years ago - when Sharma was posted to Raipur as SRP - these children spent much of their time picking rags, pockets and some-times suitcases on the platform.

They were a bominably dirty, scoured constantly for cigarette butts to smoke and used filthy language. But Sharma saw hope in their unexpected zest for life. After a long chat with the youngsters, he realised that most of them wanted to abandon their wretched existence but lacked education and guidance to do so.

After another chat, this time with his colleagues, he found that a woman head constable, Chamelibai Rautray, had been a teacher before joining the force. That was all the motivation he required: with Rautray and himself as teachers, one blackboard and nearly 25 students, he set up a school in a relatively isolated part of the platform.

The only aspect he did not have to worry about was the formation of the parent-teacher association the students are orphans or run - aways who don't know who their parents are.

The funds he subsequently helped raise all officers above the rank of ASI contribute Rs 100, pooling nearly Rs 1,300 every month provided uniforms and stationery for the students. School timings are not rigid and the children who now work in tea stalls, collect and sell plastic containers, even pull carts can either study at 9 a.m. or 4 p.m. "These timings also do not interfere with my responsibilities," says Sharma.

FAR TO GO: Sharma has converted part of the platform into a school for the railway children

He has also opened a bank account into which every child is obliged to make a weekly deposit of Rs 20; a child earns a minimum of Rs 120 per week, spending most of it on food which Sharma is now trying to provide free at least once a day.

The money in the fixed deposits will be available to the children when they turn 18 and Sharma hopes that each child will have at least Rs 10,000 to start life a new. He has also made weekly baths and medical check-ups mandatory. "The greatest satisfaction has been a sharp decrease in thefts reported on the platform.

Over the past few months, I have not received a single such complaint," says Sharma. He is also negotiating with various government departments to initiate a weaving class for the children at the station.

The school is not the only social welfare project Sharma has undertaken. He is India's only police officer to have won the Vriksha Mitra award presented by the Ministry of Environment and Forests. For a policeman who has chased dacoits and quelled riots, Sharma has an unusual fascination for trees and has planted more than two lakh so far.

The affair with trees began during his posting as SP at Damoh in Madhya Pradesh, where Sharma decided to do something about the huge but barren police compound. He also observed frequent bickering and quarrels among the off-duty policemen in the adjacent barracks. He inspired these men to plant trees.

Over the next two years, they helped him plant one lakh trees in police stations and different parts of the town. The tree-planting frenzy in Damoh saw a sudden dip in the town's temperature.

And an amazed Sharma found that the policemen too had become less irritable. Later, while serving in Bosnia, his theories on the beneficial impact of greenery became a subject of study for the Interpol.

Sharma has come a long way since 1979 when he joined the state police service. So perhaps will 25 children for whom he has tried to pave a better future.