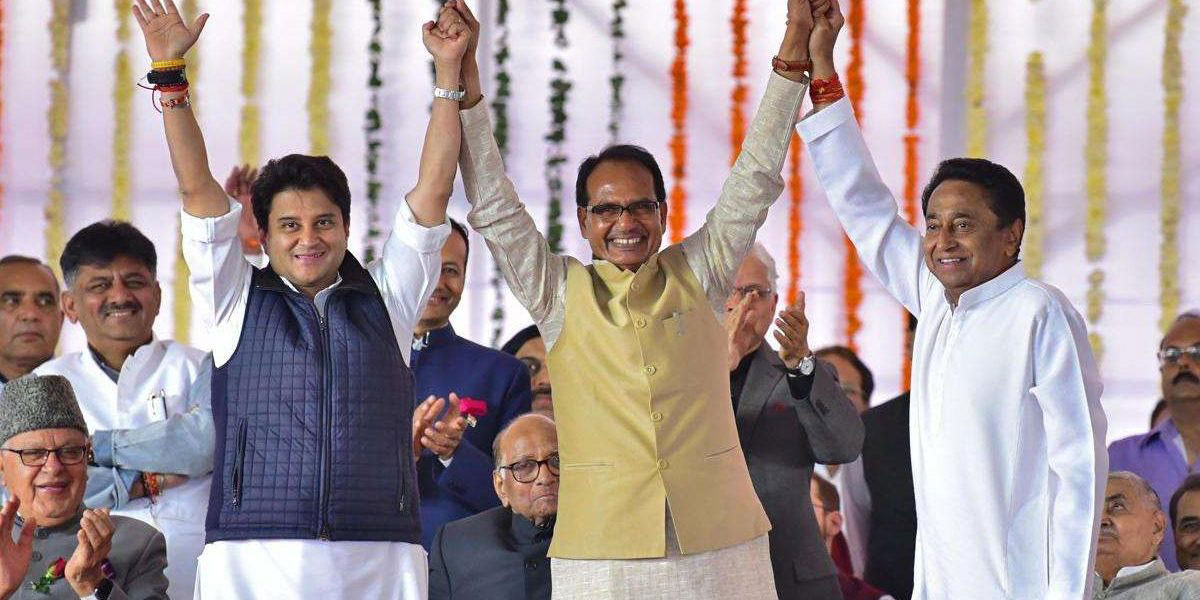 Bhopal: Though the by-elections in Madhya Pradesh have not received as much attention as the assembly elections in Bihar, they are just as important. There are 28 constituencies heading for premature elections on November 3, the largest ever in the state, which will decide whether Shivraj Singh Chouhan, who came to power through the back door, will remain in the saddle.

The bypolls were necessitated after the Congress government in the state fell when 22 of its MLAs walked away with Jyotiraditya Scindia, resigning their assembly seats and joining the BJP.

Scindia’s rebellion happened just as the coronavirus outbreak was worsening in India in mid-March. It was clear that the personal enmity between then chief minister Kamal Nath and Scindia was the reason for the latter quitting the Congress.

Kamal Nath has made the by-elections a vote on the “betrayal” of the rebels, who he says ditched the mandate of the people and sold it to the highest bidder. He has even been to Jhansi at the head of a yatra to declare that the Scindias have historically betrayed the people as they did the Rani of Jhansi. Not to be left behind, Scindia claimed that Kamal Nath “betrayed” the people by not fulfilling the promise of waiving farm loans.

Whatever spin the leaders are trying to give, there is a feeling among the electorate that each of the 25 MLAs who defected to the BJP since received crores of rupees to do so. Tulsiram Silawat and Govind Singh Rajput, both of whom were ministers in the Kamal Nath cabinet, are seen as the prime motivators and beneficiaries of this ‘horse trading’.

The poll arithmetic is stacked in the BJP’s favour. The BJP currently has 107 MLAs and the Congress has 88. Additionally, there are four independents, two SP and one BSP MLAs. The BJP effectively has to win just five of the 28 seats up for grabs to retain power, assuming it receives the support of some of the non-Congress, non-BJP MLAs.

The Congress faces an uphill task and will have to win all the 28 seats to make it to 116, the half-way mark. It will have to win at least 21 to allow it to make a coalition, which the BJP with its vast resources will in any case not allow.

The bypolls will also see several leaders battling each other.

First among those are Kamal Nath and Scindia. Then the more crucial one between Scindia and Digvijay Singh, as the latter who is believed to have pushed the former down the rung in the Congress. Both belong to the northern belt and wield influence over roughly the same territory. There are 34 seats in the Gwalior-Chambal region, which both aspire to control. In 2018, the Congress won 27 of these seats, largely due to the overwhelming opposition to SC/ST Bill brought by the BJP in parliament. Voters from Schedule Caste communities swung the win in at least 16 of the 27 seats won by Congress.

In the Gwalior-Chambal region, there are 16 seats at stake in the bypolls and the BJP has cleverly left it to Scindia to secure them. Though he has considerable influence, it is negated by the BSP and traditionally, the Scindias have bowed to Mayawati and struck a partnership with her. The BSP has never put up a candidate against the Scindias from their strongholds of Gwalior, Morena and Guna, or at best put up a friendly fight to prevent the BJP from poaching.

But since Scindia is with the BJP now, it remains to be seen what Mayawati’s strategy is. The BSP has already announced candidates for eight seats in the north, which it has won in the past.

For Digvijay, who captured the first Rajya Sabha seat from Madhya Pradesh at the expense of Scindia and infuriated the latter, it is time to prove that he is the clear leader in the north. He has already groomed his son Jaivardhan and controls almost all the satraps and members of erstwhile royal families in the region, from K.P. Singh to Gobind Singh and Priyavrat.

Union minister Narendra Singh Tomar, who is also from Gwalior, is eager to come back to MP as a possible chief minister candidate. Tomar does not want Scindia’s presence to undercut his importance to the BJP in the future.

So a complex structure is at play in the 16 seats in the north and it will hurt Scindia if he does not sweep the region.

Chouhan under threat, but has achievable targets

The other war is being fought by Shivraj Singh Chouhan, all by himself. He escaped investigations of the Vyapam scam by playing along with Kamal Nath when the latter was in power. He is believed to have even helped the Congress CM garner two abstentions from BJP MLAs when Nath was facing a trust vote.

Kamal Nath totally miscalculated Chouhan’s apparent camaraderie and did not proceed with the many corruption cases against the BJP leader and his associates, which was a key promise that the Congress made to the people.

When the opportunity arose, Chouhan was happy to usurp the chief minister’s seat. He is believed to have played a key role in overseeing the defection of the Congress MLAs and holing them up in a Bengaluru hotel.

The targets that Chouhan has to achieve are relatively easier. A miserable performance where he loses 21 seats to the Congress, even if his government does not fall, will be seen as a personal loss. The BJP has been forced to field all the 25 Congress rebels and this is entirely against the grain of the party in the state. It has left senior leaders – and their supporters – who lost to the former Congress leaders in the 2018 assembly elections with a hollow feeling. Prime amongst them are Jaibhan Singh Pavaiyya, Ajay Bishnoi, Bhanwar Singh Shekhawat and Mudit Shejwar, who will be forced to support the candidates who defeated them.

It is more or less clear that the BJP’s central leadership does not hold Chouhan’s administrative skills in high regard. His handling of coronavirus crisis and the law and order situation in the state since taking over in March has come for severe criticism within the party.

The BJP may well replace him with Tomar at the first opportunity, but if Chouhan does manage to put up a creditable performance – winning at least half of the 28 seats – then his political skills will give him the opportunity to see out his term. 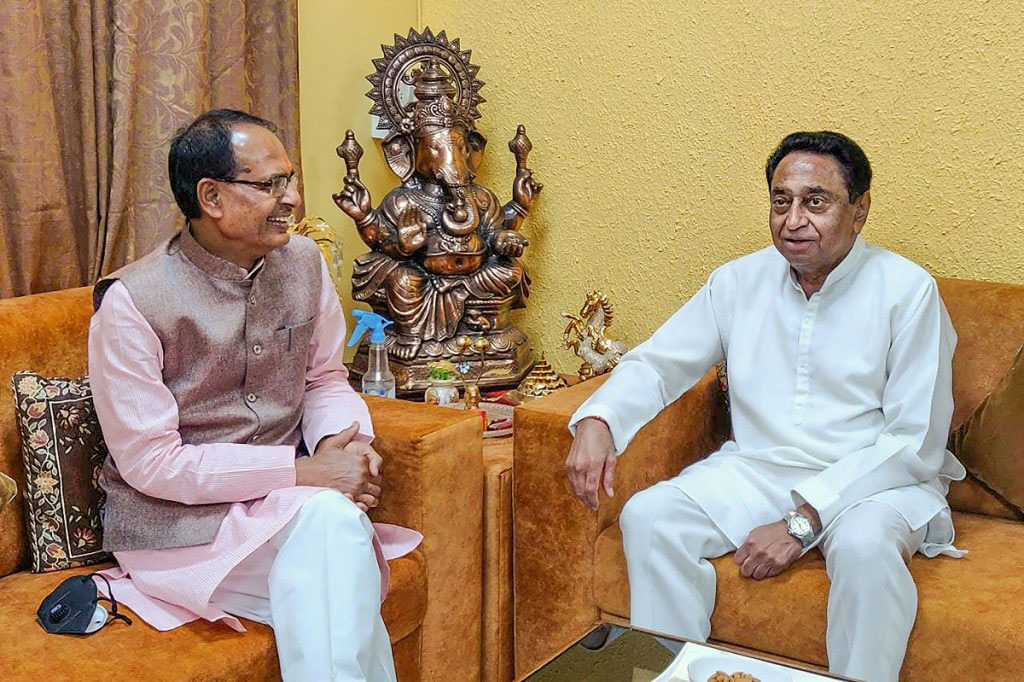 To help him, he has former Congress stalwarts like Bisahu Lal Singh from Shahdol region, who is an eight-time Congress MLA. He was denied a cabinet berth by Kamal Nath and even though he is not a part of the Scindia camp, he also deserted the grand old party. Others who have the money and winnability factor are Tulsi Silawat and Govind Singh Rajput. Both of them will cease to be ministers in the Chouhan government on October 21, as their six-month term without being a member of the assembly will end two weeks before polling.

The BJP’s internal assessment currently suggest that the party will win just five seats. But the Congress should not be complacent, as this could well be a misdirection. Even if the Congress wins the other 23 seats, it will still be unable to form the government without the help of the independent, SP and BSP MLAs. That’s a tall order, as the party needs a clean sweep to put all doubts to rest. For the BJP, scuttling those chances should not be hard.