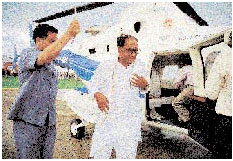 Embarrassed: Digvijay Singh did not foresee the surge in tribal assertion

When Subhash Yadav, deputy of Chief Minister Digvijay Singh, recently addressed a tribal rally in Khargone district in Madhya Pradesh and proposed that 72-year-old Jamuna Devi, also a deputy chief minister, should be made the first tribal chief minister of the state, there was more to it than met the eye.

While the demand for a tribal head was not really new, Yadav's decision to zero in on Jamuna Devi-her hostility towards Digvijay is no secret-was perceived as a serious attack on the chief minister's stewardship.

As some leaders within the state Congress began to rally around the idea, it was evident that the impregnable wall that Digvijay had assiduously built around him-self was beginning to crack.

The timing of the rally could not have been worse for the chief minister. Already facing a spate of protests over a controversial proposal to hike power tariffs, Digvijay found himself in a tight spot.

"These things are decided by the high command," he says unconvicingly, referring to the demand for a tribal chief. The Cabinet's belated recommendation of smaller hikes in power rates under pressure from the farmers too has done little to save his face.

Call for change: Jamuna Devi is being projected as a tribal alternative to Digvijay Singh

For those pushing for a tribal chief minister, Digvijay's embarrassment has come as a handy tool. Although Yadav and Jamuna Devi have discreetly toned down their rhetoric following the Cabinet's recommendation, Urban Welfare Minister Sajjan Singh Verma, who has thrown his lot behind them, is doing the needful.

Verma's support means that it has the blessings of his mentor, Congress General Secretary Kamal Nath. Also keeping the tribal pot boiling is Kalpana Parulekar, Congress MLA from Ujjain, who is staging overnight protests at the Assembly.

"With only one year left for the elections, it is time to support the chief minister, not attack him," says Health Minister Bala Bachchan, a Digvijay loyalist commenting on the ugly turn of events. Some ministers have even suggested disciplinary action against Yadav, Jamuna Devi, Verma and Parulekar. A team was also sent to Delhi to apprise party President Sonia Gandhi about the matter.

The truth, however, lies somewhere in between. Many Congress MLAs and ministers from the vast Malwa-Nimar belt fear that their days are numbered, thanks largely to Digvijay's power pol-icy.

Says Yadav: "A farmer who produces 100 tonnes of wheat earns Rs 60,000 and he is expected to pay Rs 55,000 to the electricity board. What will he feed his children with and why should he vote for the Congress?" The question has set many thinking.

As the Yadav lobby sees it, the demand for a tribal chief minister is more plausible when placed against an issue like this. In fact, the first time the idea of a tribal head was mooted was in the mid-1990s when Dilip Singh Bhuria, then in the Congress, calculated the tribals could easily dislodge Digvijay given the clout of Sitaram Kesri, then the Congress president, and the fact that they comprised 36 per cent of the population in the state. He had also pro-jected Ajit Jogi as a possible candidate.

Digvijay's team immediately went into overdrive and 62 tribal MLAs submitted a document to Kesri stating that Jogi was not a tribal but a Scheduled Caste. The issue still chases Jogi but it came in handy when Chhattisgarh was formed. He was foisted as chief minister of the new state which got the larger chunk of the tribal population.

Madhya Pradesh was left with fewer tribals and Digvijay assumed the demand for a tribal chief would die down. But Yadav's missile seems to have shaken him. As he mulls over how he can cope with the situation, Yadav's supporters are making sure it will be an uphill task.