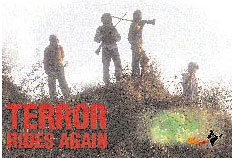 Gun law: More than 200 dacoits are scouring the Chambal region for victims.

When 21 pandas from the spiritual hub of Mathura in Uttar Pradesh were invited to participate in a huge mahayagna being conducted in neighbouring Madhya Pradesh last year and were paid Rs 50,000 as advance, many of them found it difficult to refuse the offer.

So what if the event was to be held in the heart of the dacoit-infested Bhind district. So what if the invitation came from Nirbhay Singh Gujjar, one of the most dreaded bandits in the Chambal ravines. The money was too good and the dacoits would not harm religious people like them. Or so they thought.

When they reached the ravines, the pandas realised that money itself is a religion. The mahayagna was just a bait to lure them into a trap. Each panda had to cough up Rs 5 lakh as ransom before they were allowed to return. The money was paid through a network of intermediaries who interfaced with their families back home in Mathura.

Similarly, five people from Guna district of Madhya Pradesh thought they were on to a major archaeological find last year when a local guide told them about a treasure trove of ancient artefacts in Bhind. But when the relic hunters arrived in Bhind they were promptly handed over to Rajjan Gujjar's gang. Again, each hostage had to pay Rs 5 lakh for his release.

Man Singh is dead. Phoolan Devi is now a lawmaker. And Malkhan Singh has been leading a normal life after surrendering to the police in 1982. But their legacy continues to haunt the Chambal ravines. After a lull of almost a decade, dacoity has re-emerged in its 21st century avatar as a fusion of extortion and kidnapping, a wedding of the urban mafia and the rural bandit.

In the past 12 months, over 1,000 kidnappings have taken place in the Chambal region comprising seven districts of Madhya Pradesh, nine of Uttar Pradesh and two of Rajasthan. A dozen big gangs with a combined strength of almost 200 armed dacoits are scouring the countryside. Their victims: prosperous farmers, doctors and bureaucrats.

But anyone worth anything is no longer safe. In a crunch, even marginal farmers and struggling shepherds will do. For instance, members of the Mahabir Gujjar gang kidnapped 24 shepherds and released them only after a collective ransom of Rs 3 lakh was paid. That's chickenfeed compared to the estimated Rs 50 crore that has changed hands for the safe return of hostages in the entire Chambal region in the past year.

In this lucrative business, urban crooks are the new partners of the dacoits. They help identify potential victims and pass on information about their movements to the dacoits. Daily schedules of rich businessmen and affluent professionals are kept under watch and are crucial for the planning and execution of the kidnapping. Sometimes, like in the case of the treasure hunters from Guna, these crooks even deliver the victims to their captors.

After the kidnapping, these urban thugs act as intermediaries between the victims' families and their kidnappers, negotiating the ransom money and the modalities of payment. During the negotiations, the victims are kept at hideouts in small towns and villages in the ravines. Bhind in Madhya Pradesh and Etawah in Uttar Pradesh have emerged as the favourite havens for hiding victims picked up from as far as Delhi, Kanpur and Ghaziabad. 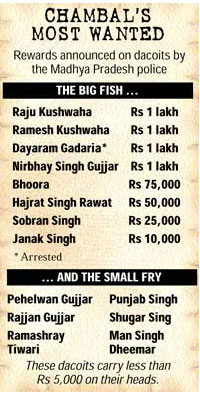 The local police have not remained silent spectators in this well-oiled system. In fact, in many cases, lower level policemen have worked as accomplices for the dacoits, providing them a place to hide the victims before they are taken to the hideout in the ravines.

Nirmal Patel, a rich farmer from Mangrol village whose son was kidnapped by dacoits last year, relates the modus operandi. "My son was kept in the local than a for three days before being taken to the ravines. When some influential politicians offered to talk to senior officers, I refused because I knew it would not help. I paid the ransom and my son was delivered safely."

The crime graphs in police stations consequently do not show any alarming rise in kidnappings and dacoities. If police records are to be believed, there were only 191 kidnappings in 2000, while 101 dacoits were arrested and 23 killed in 33 encounters. But how many of these were actual encounters is debatable. In the forgotten badlands of the Chambal valley, fake encounters and cold-blooded killings of innocents is not an uncommon aberration.

The most glaring example is that of a poor Scheduled Caste villager from Datia district who was kept in custody for three months before he was shot dead in cold blood and shown as a dacoit killed in an encounter. The farce would have succeeded but for a senior police official who spilled the beans. However, thanks to a massive cover-up by the state police, nothing came out of the enquiry into the incident and the guilty officer is now stationed in Mumbai.

That the police is also hand in glove with the dacoits is an open secret. When Sayyed Ahmed's teenaged son was kidnapped, the farmhand from Parna village in Agra district collected Rs 31,000 from the community to pay for his release but did not go to the police. Why? "I approached the police when the letter demanding the ransom came by post and gave it to them. But they lost the letter itself. It had been posted at a post box near the police station," he says.

Today, Ahmed fears the police as much as he is scared of the dacoits who kidnapped his son. Silence and secrecy are the ground rules and the victims observe them staunchly. "When I was kidnapped my family contacted not the police but the intermediaries. That is the safest way," says Brijnandan Dixit, a farmer from Bhind who had to pay Rs 1.5 lakh as ransom for his release last year.

"It is best and safest to contact intermediaries."
Sayyed Ahmed,
Parana village, Agra
When he got a letter demanding ransom for his son's release, Ahmed gave it to the police. But they 'lost' it. Ahmed got the message and paid Rs 31,000 ransom.

The state governments are now taking some feeble steps to fight the menace of dacoits. Since the beginning of 2000, the Uttar Pradesh and Madhya Pradesh police have been running joint operations against the dacoits.

Exchanging notes and sharing information on the bandits have helped eliminate two notorious dacoits, Hari Baba and Lalaram, in the past year. "We are confident of tackling the problem," says Inspector-General (Gwalior Range) N.K. Tripathi. Madhya Pradesh Chief Minister Digvijay Singh has announced a programme for the formation of gram raksha samitis (village protection committees).

The programme envisages providing arms to a group of 10 people of any village terrorised by dacoits. At least four people from each group will be trained for a week. In a bid to curb corruption at the lower levels, Madhya Pradesh Home Minister Mahendra Baudh has already directed the Police Department to avoid posting a policeman in his home district and to ensure that no officer spends more than five years in one division.

The general feeling though is that any strategy will have to be a mix of aggression and conciliation. INDIA TODAY investigations revealed that many gangs want to surrender but do not trust the police of Madhya Pradesh or Uttar Pradesh.

For example, the Mahabir Gujjar gang, which operated in Morena district of Madhya Pradesh, travelled all the way to Dhaulpur to lay down its arms before the Rajasthan Police on January 18.

Madhya Pradesh Additional Director-General Rajendra Chaturvedi, who took his chances against Malkhan and Phoolan as a young superintendent of police in the early 1980s and persuaded them to surrender, says any initiative should work to eliminate the problem of dacoity, not fight individuals. Perhaps, another surrender mela is needed.

"We are confident of tackling the problem of dacoits." N.K. Tripathi, IG Gwalior Range