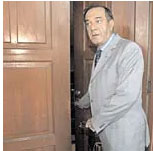 India may be fighting a losing battle on the extradition case of Italian businessman Ottavio Quattrocchi and, if the assessment sent by the Foreign Office to the CBI and the Government is any indication, it is already on a very sticky wicket. The report, according to sources, states that prima facie, the extradition request itself is not very strong. In view of the 2002 judgment passed by a Malaysian court and another by an Indian court, the Ministry of External Affairs (MEA) contends that the case may not stand in the courts in Argentina in the absence of any "new and compelling evidence".

Certain critical roadblocks have been cited by the MEA. The first relates to the extradition papers carrying proof gathered by the investigating agency of the existence of offence. The 250-page extradition request is rather weak. Yet another bottleneck is the lack of solid evidence. Earlier in 2002, the CBI had failed to present sufficient evidence against Quattrocchi in the Kuala Lumpur High Court which dismissed its extradition request because of "grossly insufficient facts no costruction of sequence of events and crime".

Sensing the political implications of the case, the Foreign Office has maintained that while the MEA will extend all possible assistance, with the Indian ambassador to Argentina having been instructed to chip in, "the CBI will be responsible for adequate evidence".

Quattrocchi's clout with the Italian Government is apparent in the way it has pulled all stops to ensure he is not extradited.

Ironically, even as the MEA was issuing its assessment, the Argentinean Foreign Office was informing Indian envoy Pramathesh Rath that the extradition request handed over to them, together with the annexure, were being forwarded to the Federal Court in El Dorado in Misiones province. The Indian envoy, accompanied by a two member CBI team of S.K. Sharma, Director, Prosecution, and Superintendent of Police Keshav Mishra, had submitted the extradition papers to the Argentinean government on March 2 soon after the duo reached Buenos Aires.

There are several other hurdles. If the lower court dismisses the extradition case, the only recourse left would be for the CBI to move the Argentinean Supreme Court, which is unlikely to say anything different. The CBI, it is quite apparent, has a tough legal battle in its hands. Quattrocchi's lawyer Alejandro Freeland argues that the Italian businessman was residing in India till 1993, seven years after the Bofors case broke, but was never questioned or approached by the agency during that time.

What may further add to the CBI's woes is Quattrocchi's clout with the Italian Government which he has put to use in an effort to bail himself out. It's a measure of his influence that Italian Ambassador to Argentina Stefano Ronca has pulled all stops to ensure he walks away free. Earlier, the Italian embassy had even supplied references to the Argentinean courts, vouching for Quattrocchi's character and helping him secure bail that was initially denied to him.

Then, Ronca wrote to the Argentinean court and its foreign office that Quattrocchi was a much decorated citizen of Italy and it would not be proper to extradite him to India. Quattrocchi is a "Grand Officiale" of Italy-an honour he received for attracting business to the tune of over $10 billion (Rs 45,000 crore) for Italian companies. Sources say this may well be his second line of defence in case the CBI provides clinching evidence, thereby making his extradition a political decision for Argentina.

Meanwhile, facing a barrage of criticism, the CBI is putting up a brave face. "Argentina does not have a very encouraging record with extraditions, but our papers are in order and we have given an assurance of reciprocity," an official said. Also in the dossier are Interpol documents tracking Quattrocchi's money-flow from Switzerland to Bahamas to BSI AG in London. Britain had initially frozen Quattrocchi's accounts based on revelations relating to the money trail that had been provided by Interpol. The CBI also plans to label the Italian an absconder who has never appeared in an Indian court.

Legal analysts hold out hope in the event of some fresh evidence coming to light. "Purely on legal grounds, chances do seem even," says lawyer O.P. Rawat. But Section 11A and 11B of the Argentinean Extradition Act open a window large enough for Quattrocchi to escape. The sections provide that the offence should be punishable in Argentina, as well, and that the accused cannot be punished twice for the same offence. There is also some time bar on pursuing a case.

Freeland has indicated he will bring up the matter of defreezing of Quattrocchi's accounts in London after Additional Attorney General B. Datta's submission "that no useful purpose will be served in pursuing the case". The plea can well be that the case is dead and Quattrocchi is being pursued purely for political ends. Besides, in Argentina, the nature of his crime may not stand before a court, as middlemen in deals are not prohibited. For now, it is clear that it will take more than a legal net to nab the elusive Mr Q.