Analysis, Politics - 08-Jun-2020
Bhupesh Baghel Has Appointed a New Head of Chhattisgarh Police's EOW For the 5th Time in 15 Months
The Chhattisgarh CM is resolute in his stance against past corruption. And infamy for decisions is a small price to pay. 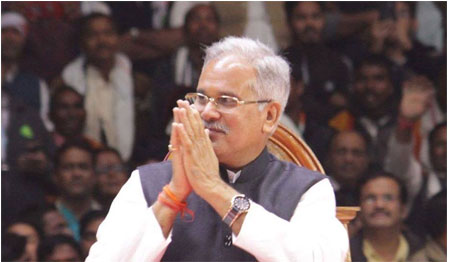 Raipur: What is it about the Economic Offences Wing of  Chhattisgarh Police that makes it imperative for state chief minister Bhupesh Baghel to interfere in its functioning and not let it settle into a rhythm?

Baghel’s famous impatience has resulted in the exit of yet another head of the EOW – the sixth since he took over as chief minister in December 2018.

Baghel’s decisions are now in the same league as postings made by K.P.S. Gill as police chief of Punjab. He has put two ADG-level officers out of office – other than G.P. Singh, he has also ousted Himanshu Gupta who was heading the Intelligence wing.

By handing over the Intelligence wing to Raipur Inspector General Anand Chabda, a relatively junior officer, and the EOW to Chabda’s junior, Sheikh, Baghel has sent the clear message: he will keep direct control of the police brass.

Chabda continues to hold charge as IG of Raipur and Sheikh remains Raipur SSP. Chabda also heads a committee that monitors journalists and social media. Amidst all this, meanwhile, is home minister Tamradhwaj Sahu, who appears to have no say in the matter.

When Baghel took over, Mukesh Gupta had been the ADG in charge of the EOW department.

Gupta was immediately shunted out and his batchmate and present DGP D.M. Awasthi was given the charge, along with a set of express instructions. Awasthi was shifted out within a month and an officer as infamous as S.R.P. Kalluri was handed the charge.

There was opposition to his posting from several segments — particularly civil society and from within the party — because of his devastatingly poor human rights records in Bastar and elsewhere.

But on the job, Kalluri was able to produce results that Baghel clearly wanted. He was able to file FIRs against Mukesh Gupta, former chief minister Raman Singh’s son-in-law Puneet Gupta, Singh’s principal secretary Aman Singh and several others. He also began investigations.

Eventually, Mukesh Gupta was suspended and all others got bail from the high court and Supreme Court. Meanwhile, Kalluri was removed and replaced with the returning DGP V.K. Singh. Then IG, G.P. Singh was placed under him.

V.K. Singh retired in about nine months and G.P. Singh took over. He has had the longest tenure so far.

Departmental officers say that he was meticulous in his investigations but the courts came to the rescue of people who had been implicated in various cases by the EOW. Some others blame poor chargesheets and faulty FIRs.

It appears that Baghel’s main concern was to put his political rivals and those officers who helped the BJP beyond the call of duty in a fix.

Mukesh Gupta, notably, had particularly enraged him, even when he was Pradesh Congress Committee president. Baghel had promised during that period that he will tighten the anti-corruption screws on them if he ever came to power. He was quick to suspend Mukesh and later demote him as well.

Mukesh remains under suspension, out of Raipur, and out of sight.

Unfortunately for Baghel, some of the officers who are accused by the EOW and even the ED are now working directly under him.

Some of them were even raided by Income Tax authorities and the Enforcement Directorate in February, in high profile raids of the Baghel government’s most powerful, allegedly at the instance of the top political bosses in Delhi.

Baghel, though resolute in his stance against past corruption, will likely not get any points for methodically seeking out the culprits, pursuing their cases decisively and getting them punished by courts.

Those who understand and know the set-up in Raipur, know that the same people who ran the show during Raman Singh’s tenure are back and their dense network of connections with the present accused is beyond the comprehension of the present regime.

What Baghel is perhaps unable to see that changing the in-charge of the EOW will not make the delivery of his promises any simpler.