Analysis, Politics - 14-Aug-2020
After a Career as CEO, Kamal Nath Finally Decides to Become a Politician
With pujas, recitals and public addresses, the Congress veteran has been trying to play a role he has ignored all his life. 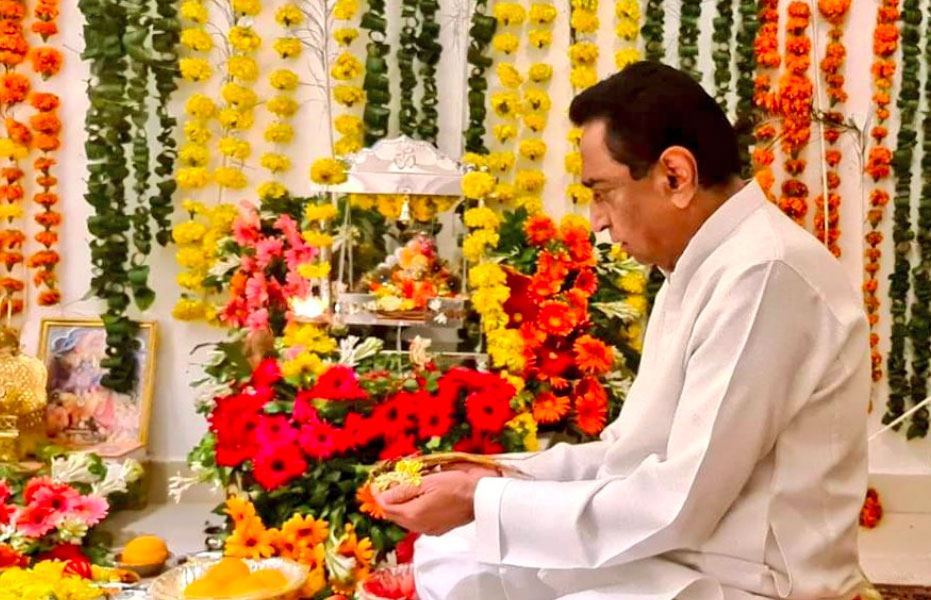 Bhopal: In his 14 months as chief minister of Madhya Pradesh, Kamal Nath was known to reach office by 10 am and work from there till late in the evening.

He seldom made constituency visits, or visits to accident or incident spots and spent the weekends in Delhi. He did not need a professional press advisor, a political advisor or even the assistance of the state publicity department.

He had outsourced all that to Digvijaya Singh and concentrated instead on promoting investments.

After he was outmanoeuvred by a rampaging Amit Shah earlier this year, thus losing his chief minister’s chair, Kamal Nath has had a change of heart. He now wants to become a bread-and-butter politician for the first time in his life, after more than 40 years in the public offices.

So far he has been known as the ‘CEO from Chhindwara’ who has believed in development and not tamasha. But now, it is clear that what he wants is a tamasha every week.

He has recently performed a yagna and Hanuman Chalisa recital in Bhopal. This took place just a day before prime minister Narendra Modi performed the bhoomi pujan in Ayodhya. He lit a lamp in the Pradesh Congress Committee office and apprised everyone who did not know, that it was actually Rajiv Gandhi who had opened the doors of the Ram temple in Ayodhya where the prime minister did the bhoomi pujan.

#WATCH Foundation stone has already been laid, Rajiv Gandhi ji did it: Digvijaya Singh, Congress on being asked about Kamal Nath's statement that Rajiv Gandhi also wanted #RamTemple to be constructed pic.twitter.com/BvViPC2KSI

Within days he was organising a celebration of Krishna Janmashtmi at his residence in Bhopal. No one in his constituency can recall when the last time was that Nath did anything public or religious on Janmashtmi in his eight terms as MP from Chhindwara.

Nath wants to address the whole of Madhya Pradesh through a “Jan Sambodhan” programme, to be streamed live by the Congress. He had promised that he would be back by August 15 as chief minister to address the Independence Day parade, but the idea seems to be that this will do for now.

The BJP, of course, is enjoying his utter discomfort in this new role and has been mobilising cadre to dig out old tweets.

Some uncharitable comments have been made by state home minister Narottam Mishra. It is a sign of times that Mishra thinks he can make such remarks against Nath. Everyone knows and assumes that the changed Kamal Nath that they see today is a result of the humiliating upset in March where most Congress members were surprised not by Jyotiraditya Scindia’s desertion but by Nath’s inability to handle the situation.

In contrast, today, Ashok Gehlot looks much smarter as a representative of the Congress’s old guard.

A senior party member says that both Nath and Digvijaya Singh should realise that they are no longer required either by the public or the party in the state. “Both should retire gracefully and leave it to their sons. Jayvardhan, at least, seems competent and up to the task,” he says.

Almost everyone agrees that Nath was a resounding failure as a chief of party as he did not know what his own party members wanted. “He may have been a good administrator but he is not a politician in the same class as Digvijaya Singh, Arjun Singh or Sunderlal Patwa,” the Congress leader says.

For 14 months, Nath had not filled the posts of chairpersons of boards and corporations. He scarcely listened to his ministers and surrounded himself with bureaucrats rather than party workers. Now he wants the same workers to attend his several pujas and sambodhans. His favourite bureaucrats have rushed to Shivraj’s side.

Contrast this with what Bhupesh Baghel has done in Chhattisgarh.

Almost 100 senior Congress members have been appointed to various posts and bodies. After all, the party had been out of power in both states for 15 long years and the loyalists now expect rewards.

The problem with Nath is that for much of those 15 years he had remained in power as a minister in the United Progressive Alliance 1 and UPA 2 at the Centre so he had hardly felt the need to connect with ground workers. It is now a bit late to try and do the same in his twilight years. It is now likely that even if Congress manages to win the by-elections in the state and somehow returns to power, Kamal Nath may not.